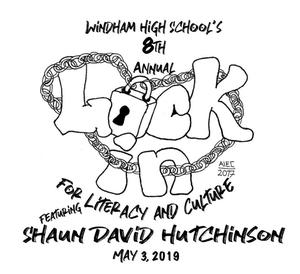 Students and volunteers will pack literacy and fun into a full night of activities.

Windham High School Write Idea Writing Center students will host young adult author Shaun David Hutchinson at the upcoming “Lock-in for Literacy and Culture” on Friday, May 3 at Windham High School. Approximately 200 students from all four high school grade levels will participate in the Lock-In, an overnight celebration of Windham students’ involvement in the reading and writing community that also enhances stronger connections to each other and school staff. Students’ “ticket” into the event is reading and responding in writing to one of four of Hutchinson’s books. The event starts at 7 PM on Friday, and continues until 7 AM Saturday morning.

Shaun David Hutchinson is a critically acclaimed, award-winning author of young adult novels. Four of his books were selected for Windham High School students to read: The Five Stages of Andrew Brawley (Winner of Florida Book Awards’ Gold Metal in YA Category; Rainbow Project Book List Award Winner, 2016); We Are the Ants (Rainbow Project Book List Award Winner, 2017; named a best book of January 2016 by Amazon.com, Kobo.com, Publishers Weekly, and iBooks); At the Edge of the Universe: and The Apocalypse of Elena Mendoza. Other books by Mr. Hutchinson include The Deathday Letters; FML; Violent Ends; Feral Youth; The Past and Other Things That Should Stay Buried; and the memoir, Brave Face, which will be published on May 21, 2019. Mr. Hutchinson writes imaginative literature with characters that represent many areas of the gender and sexual identification spectrum.

In addition to addressing the assembled students, the author will teach a creative writing workshop to Windham High School students. Additional activities throughout the evening will include basketball and volleyball, Health through Movement class, Korean hip-hop dancing, hula lessons, swing dance lessons, hair, nails and henna stations, arts and crafts, photo corner, cupcake decorating, a pronoun activity offered by the Willimantic Public Library, a painting activity offered by the Task Force to Prevent Child Abuse and Neglect, activities offered by the Windham High School academic departments, and a midnight supper.

Students each receive a commemorative, hand tie-dyed t-shirt which they are required to wear throughout the event, which ends at 7:00 a.m. on Saturday.

Incentive prizes with a value totaling more than $2,000 will be distributed to participating students. Students earn tickets for participating in literacy and community-building activities which are entered into a drawing. Prizes include a kayak, bicycles, a mini-fridge, ice cream maker, a tent, a Fitbit, movie sets, board games, a swimming pool, digital camera, crochet set, bean bag chair, bedding, pots and pans, a record player, and gift cards donated by local businesses. Donations are solicited from sponsors throughout the year.

“This year-long project is a lot of work, including many volunteer hours to coordinate and host the Lock-in,” says Ms Bowling. “We are so lucky to have so many Windham High School alumni who return to help out, plus students from Eastern Connecticut State University and staff. For many volunteers, it’s a standing date on their calendar,” she adds. “Since our students work so hard for the privilege to attend this event, it’s great to reward them with a full night of rich activities.”

Windham High School’s Write Idea Writing Center is Windham High School's student-staffed, peer-tutored writing center. It was opened in the spring of 2011 as a result of collaboration between Windham High School, the University of Connecticut's "W" Writing Center, and the Connecticut Writing Project. Tutors are nominated by teachers or peers and receive intensive weekly training in writing, as well as in tutoring and questioning techniques. The training they receive is the training brought to Windham High School by the University of Connecticut. Tutors volunteer in the Write Idea during study halls and after school. Tutors are trained in writing across the curriculum and are able to help with writing assignments in multiple disciplines. They are also ready, willing, and able to work with students on personal writing. These tutors organize the Lock-in for Literacy throughout the year as their major project.

To donate to support the Lock-in for Literacy, please contact Windham High School at 860-465-2460.